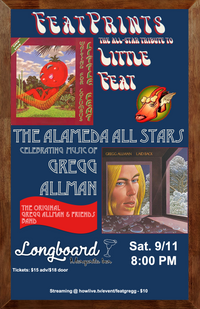 Come join FeatPrints - the all-star tribute to Little Feat as we pay tribute to 50 years of American music history with the music of Little Feat.

Throughout the 70’s and into the 80’s, 90’s and into the new millennium, Little Feat pushed the envelope of accepted styles blending rocks, blues, cajun, country and fusion into a tasty gumbo. Their hits like “Dixie Chicken”, “Willin”, “Oh Atlanta” and “Let It Roll” just begin to scratch the surface on what they could do live. The legions of grassroots loyal fans that still follow them to this day are a testimony to their legacy.

Founded in 1979, The Alameda All Stars has a new mission: Celebrating the Music of Gregg Allman. This musical approach is to honor Gregory's memory based on the time we spent with him between the years 1990-2004 as band mates in his solo band, Gregg Allman & Friends - the All Stars WERE the original Friends. Besides extensive yearly tours throughout the U.S., Canada and Japan during that time, the AAS also recorded with Gregg on two of his solo albums: "Searching For Simplicity" (1997 Sony) - which was produced by Tom Dowd - and "No Stranger to the Dark: The Best of Gregg Allman" (2002 - Sony). The Alameda All Stars are pleased to announce that we are welcoming Jules Leyhe as our newest member to the band. We invite and encourage all of you to go to our Bios page on this site and check out Jules musical history. Jules will be joining Marke Jellyroll Burgstahler on lead/rhythm/slide guitar, as well as our other long-time Alameda All Stars: Tommy Miller on bass & vocals, Preston Thrall on drums, and Tommy Thompson on keyboards & vocals. Rehearsals have already begun with Jules on our bands new musical approach The Alameda All Stars: Celebrating the Music of Gregg Allman - and we are all completely jazzed about the results.